So Advent has begun, and we are to celebrate his coming. 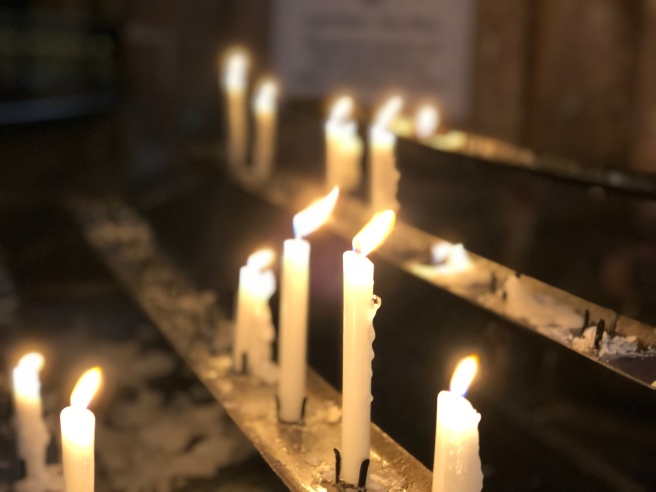 We can’t help asking. If he came, if he is coming, why this? Where is he when the child is being hurt, when the teen is cutting alone in a dark room, when the cancer ravages, when the marriage ends, when the grandmother’s heart breaks and no one is there to see? How can we celebrate his coming in a world that is still so dark, still full of evil and pain, still crying out with voices of those who have wounded and have been wounded so deeply?

We can’t help asking. Are you coming, truly? Did you ever come at all?

Only, this. I know a 15-year-old girl who spends her days gathering to herself the most broken classmates she can find. She comes into their lives, into their wounds, and she listens and loves, and she brings them hope. I know a survivor who isn’t a victim but a light-bringer. I know a grandmother who has spent almost every day of her retirement helping the unseen and alone.

Not everyone has seen His coming. But for us who have seen, His coming should change us. Like the rich men who saw the star and found hope, who traveled for months to worship the King who surpassed what they had known. Like the poor shepherds who found hope in the song of the angels, whose lives changed in an instant. Like the young girl who was asked to carry a burden she could never have imagined, but who must have seen hope every time she touched that Baby’s face.

These who saw him were changed, and they carried his coming to their world. Jesus brought hope, and he told them to be hope-bringers too. Now he tells us. Carry his hope. Boldly, relentlessly, sometimes quietly, always with love.

There are many among us who have not seen His coming. But there are many who have seen and who are silent. Preoccupied. Detached. Or maybe just afraid. If the world around us is indeed so hopeless, then where are we?

Those who find hope must become its bearers. Those who know his love must learn how perfect love casts out fear. How, the more we know Him, the more fearless we may become. My own heart tells me how far I am from this reality. But I have seen it, and I long for it. And for those of us who know, who are even just beginning to know, we must carry His coming.

Hope does not always just arrive on the doorstep, neatly wrapped with a bow. Hope is a thing to be looked for and found. Like a child in a manger that we just can’t quite believe is real, until we see him for ourselves. He has come, and he is coming, and once we find him, we become his hope-bearers. Do you have hope? Who else needs it? How will you be part of the coming?

One thought on “How his coming should change us”